Harshest Noise Ever - G.D. and Mike Damnation Nobody split...! 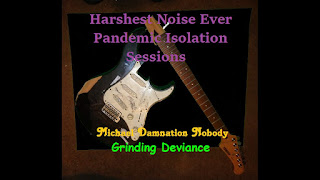 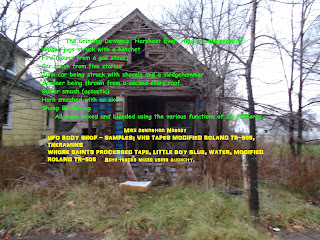 Harshest Noise Ever
This track is composed of:
Water jugs struck with a hatchet
Fire (sound from a gas stove)
Car crash from five stories
Junk car being struck with shovels and a sledgehammer
Scanner being thrown from a second story roof
Guitar smash (acoustic)
Horn smashed with an ax
Sheep Baahh-ing
All were mixed and blended using the various functions of Sound Forge.  Grinding Deviance is a one man project billed as the world's worst 'band.'  The style of harsh noise is known as Electronic Demolition Derby.

Offered at this time is what may be the "harshest" and "noisiest" harsh noise recording ever produced.  The intent here is not to make the 'loudest' recording per se because decibels are mere numbers and you can always add one more to the scale.  Put another way, Brahms Lullaby played over a stadium's sound system would drown out any Merzbow or Hanatarash recording played back on a home stereo, but what would that prove ?
As for intensity, if someone one day decided to wreck TWO cars off of a TEN story building and make a recording of it they could technically top this recording but is anyone honestly going to bother with it ?  Also, a recording of such an event could be mixed with the sound of a building demolition if yet another artist desired to 'top' everyone else.  In other words, that type of competition could go on forever.
If anyone can offer a potentially HARSHER release than this recording, I welcome the challenge.
YouTube Link =  https://www.youtube.com/watch?v=vW6O_Q2seAU
Posted by John in Michigan at 12:19 PM